To share your memory on the wall of Robert Barrington, sign in using one of the following options:

Provide comfort for the family of Robert Barrington with a meaningful gesture of sympathy.

Paul is survived by his children: Robb (Kelly), Erin (Jeff) and Adam, as well as his two favorite’ people, granddaughters, Ella and Maggie, who very happily helped care for him, and always made him smile!

Paul was born in St. John’s NL but moved to Ontario shortly after high school. A few years later, he met his wonderful wife Julie and they eventually settled down and raised their family in Sarnia, where Paul enjoyed a career working with Nova Chemicals for 27 years.

After retiring in 2000, Paul and Julie returned to St. John’s often to spend time with and to make memories with family and friends! The family would like to extend a very special thanks to the AMAZING nursing staff on the Complex Continuing Care Unit who treated Paul like family. You helped make these last 4 months so much easier for him and for us. Your kindness will always be remembered!

A wake celebrating Paul’s life will be held upstairs at the Up’s and Down’s, 226 Front St, Sarnia on Saturday April 20th from 1-4pm. There will be no funeral at Paul’s request. Cremation has already taken place. In lieu of flowers, as an expression of sympathy, those who wish may make a donation in Paul’s memory to St Joseph’s Hospice, Sarnia.

The Barrington Family in St. John’s, will be hosting a ‘Celebration of Life’ in Paul’s memory this summer.

Paul will always be remembered fondly for his great sense of humour and for his ability to make us laugh. He will be missed by all those who knew and loved him.

Print
A private interment has taken place. Arrangements are entrusted to Gilpin Funeral Chapel, 123 King St. E., Forest. 519-786-4964 We encourage you to share your most beloved memories of Robert here, so that the family and other loved ones can always see them. You can upload cherished photographs, or share your favourite stories online at www.GilpinFuneralChapel.com.

We encourage you to share your most beloved memories of Robert here, so that the family and other loved ones can always see it. You can upload cherished photographs, or share your favorite stories, and can even comment on those shared by others.

Posted Mar 14, 2019 at 09:43am
To The Barrington Family
My most sincere condolences goes to everyone with Paul's passing. My favourite memories of Paul was every summer when his family came to Sarnia from Newfoundland to visit us. Colborne Road beach was our place to "play". Another angel called to heaven. You will always be in my heart. Your cousin, Sandi
Comment Share
Share via:
FF

Posted Mar 13, 2019 at 06:34pm
RIP Paul. You created an indelibly funny memory for me the first time l ever met you in the Pine Room, back in 1971. I shall always remember you and your lovely wife Julie with love and affection.
My heart goes out to Robb, Erin, and Adam at this sad time of farewell to you. My thoughts are with Stan Meade as well because you two were bosom buddies for so many years.
Your old friend Faye Finlayson
Comment Share
Share via:
LT

Posted Mar 11, 2019 at 11:31pm
Robb Erin and Adam and families
My sympathies to you. Paul was always a person that could make you laugh with his jokes
and his singing. Julie was the love of his life.
May you always keep the memories of you Dad and Mom.

Posted Mar 11, 2019 at 09:16pm
Dear Robb (Kelly), Erin (Jeff) and Adam, Ella and Maggie, So sorry to hear of Uncle Paul's passing. Uncle Paul always had the best jokes and one liners, a great sense of humour. Many memories of Uncle Paul at the farm for birthdays, Christmas family reunions and any other reason to throw a fun party. Your Mom and Dad were always such good fun Miss them both. Praying for you all at this time ❤️
Love,
Kerry and Steve Levitt
Comment Share
Share via:
J

My heart goes out to you all in this time. Nothing is harder than saying good-bye to someone you love. May you find comfort in your memories.
Comment Share
Share via:
M

Sorry to hear of Paul’s passing. Always think of his favourite song ,Shaving cream ,when i hear his name. 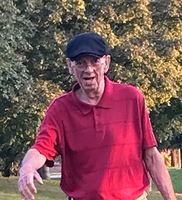