To share your memory on the wall of Stoakley, Don, sign in using one of the following options:

Provide comfort for the family of Stoakley, Don with a meaningful gesture of sympathy.

Print
Don Stoakley, "DJ" to those that knew and loved him, died peacefully on Saturday, November 2nd, 2019 while surrounded by his family at Jessica's House in Exeter, Ontario.

Donald James Stoakley was born on February 6, 1938, in Galt, Ontar... Read More
Don Stoakley, "DJ" to those that knew and loved him, died peacefully on Saturday, November 2nd, 2019 while surrounded by his family at Jessica's House in Exeter, Ontario.

Donald James Stoakley was born on February 6, 1938, in Galt, Ontario. Don grew up in Islington, attended Burnhamthorpe Collegiate, and went on to McMaster University where he graduated with a degree in History. He was a teacher for 38 years with the Etobicoke Board of Education spending most of his career at Kingsmill Vocational School and Lakeshore Collegiate Institute. He loved teaching so much he continued to teach in Wasaga Beach after he retired!

Don was happily married for 38 years to his soulmate Bev and she wants everyone to know "He was my best friend, a fantastic husband, a true romantic, a great father and step-father, and a friend to everyone he ever met. I loved him so much".

Don and Bev lived in Bolton for 17 years before retiring to Wasaga Beach. For the last 13 years, they have enjoyed their life in Grand Cove Estates in Grand Bend where Don loved running Texas Horseshoes and other social events at the "Caddyshack". An avid camper, Don spent many of the happiest summers of his life at Gull Rock Park on Lake Rosseau with friends, family, and, of course, his beloved Bev. As the son of a woodworker, Don enjoyed building things for his 5 grandchildren when they were young. He was always present with a smile and had a fun, positive charm about him wherever he was and whomever he was with.

Don had a special "thank you" he wanted to give to his physician, Dr. Thornton of Happy Valley Health Team in St. Marys, and the incredible staff and volunteers at Jessica's House and St. Marys Memorial Hospital. Their care and dedication were exceptional and we are all so thankful for it.

There will be a "Celebration of Don's Life" on Thursday, November 28th, 2019 in "The Caddyshack" at Grand Cove Estates (70592 Bluewater Hwy, Grand Bend, Ontario, N0M-1T0) from 1-4pm. All are welcome to come and visit and share a story about Don with friends and family.

In lieu of flowers, Bev and the family are asking that donations be made in Don's honour to St. Marys Healthcare Foundation (https://stmaryshealthcare.foundation) and/or Jessica's House Hospice in Exeter, Ontario (https://www.shhf.on.ca/jessicas-house-hospice-ontario/).

Print
There will be a Celebration of Don's Life on Thursday, November 28th, 2019 in The Caddyshack at Grand Cove Estates (70592 Bluewater Hwy, Grand Bend, Ontario, N0M-1T0) from 1pm-4pm. All are welcome to come and visit and share a story about Don with friends and family.

We encourage you to share your most beloved memories of Stoakley, Don here, so that the family and other loved ones can always see it. You can upload cherished photographs, or share your favorite stories, and can even comment on those shared by others.

Posted Nov 04, 2019 at 05:13pm
We (Myself & Late Husband Ernie) couldn’t have wished for better or kinder neighbours than Don & Bev. I will miss your “Good Mornings”, Hellos” and friendly waves when I go out on my deck. You sure are missed at Texas Horseshoes.
I know how difficult it is to lose your best friend, father and grandfather the thing that helped me was not to mourn his passing but celebrate the life you shared with him.
Pat Hykawy & Family
Comment Share
Share via:

Posted Nov 04, 2019 at 04:56pm
Don was my beloved big brother. Have a lifetime of memories to keep in my heart. Love always---little sister Dianne
Comment Share
Share via: 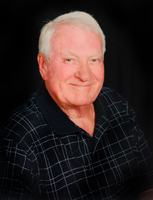