To share your memory on the wall of Cecil Murray, sign in using one of the following options:

Provide comfort for the family of Cecil Murray with a meaningful gesture of sympathy.

Cecil started farming at a young age working for his uncle. After a few years he purchased his own farm on Ridge Rd and he and Orville worked hard at fruit farming. Cecil spent many hours delivering fruit to stores and selling fruit at the local farmers markets. Cecil could tell you many market stories.

Cecil enjoyed hunting, fishing and camping. Winters were spent in Plant City, Florida. This is where he met Winifred, the love of his life. During these trips was the beginning of a courtship that began with Sunday dinners until their marriage in 1972. Together they worked on the farm, Cecil and his Win, working hard and providing a wonderful getaway for the families to enjoy and always feel welcomed at. Cecil and Winifred were an example to their family of devotion and great companionship. Eventually the farm was sold and a slower pace of life was taken on. Cecil spent most mornings at Huron Cove with his coffee buddies as well as riding his bike which he called his “Cadillac”. In 2016, after a fall and a few weeks in hospital it was decided that he should live closer to family and he moved to Clair Hills Retirement Residence where the staff took wonderful care of him.

Both Cecil and Winifred lived over 100 years, sharing their love as a couple for 37 of those years, working, vacationing and enjoying each other’s company. A legacy of love passed on to their family.

A service will be conducted on Friday, March 8, 2019 at 11:30am at the Pinehill Cemetery, 8460 Ridgeroad, Thedford. Memorial donations are appreciated in Cecil’s name to the Heart & Stroke Foundation. Arrangements are entrusted to www.GilpinFuneralChapel.com. We encourage you to share a memory or condolence online.
Read Less

We encourage you to share your most beloved memories of Cecil here, so that the family and other loved ones can always see it. You can upload cherished photographs, or share your favorite stories, and can even comment on those shared by others. 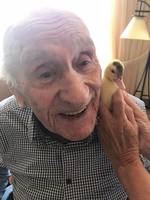